Home › Blog › The Secret To Fire Ant Control In Beaumont

The Secret To Fire Ant Control In Beaumont

If you live in Beaumont, you’re sure to be familiar with fire ants. If you’re lucky, though, you’ve never encountered them on your property. Here’s what you need to know about protecting your family from fire ants and keeping them away from your home. 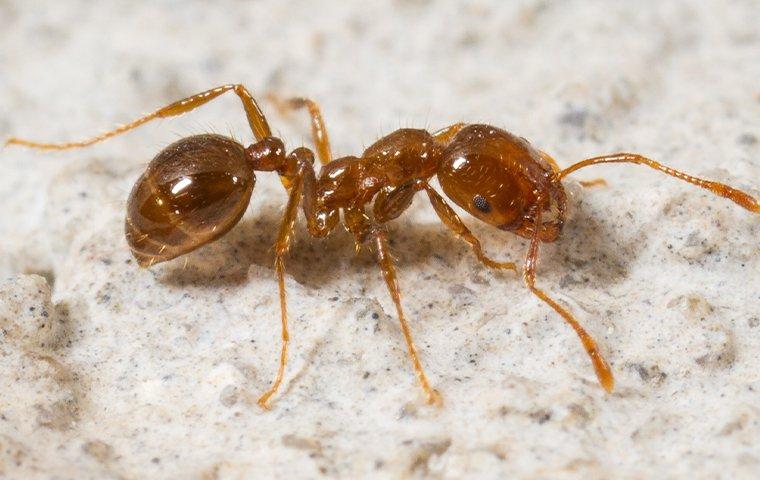 All About Fire Ants

Fire ants get their name because of the burning pain caused by their stings. Though we often talk about ant bites, fire ants actually sting their victims. Well, they bite and sting. They will bite their victim to get a good grip on them, and then sting. This results in a painful burning sensation that dwindles down to a dull ache, leaving a small white bump that may eventually start to itch.

Fire ants are aggressive pests. They’re very territorial and will attack victims who get too close to the colony. They live in large mound nests of up to four square feet and live across Texas and the Southern United States. You’ll probably identify these ants by their painful sting before you ever manage to see an ant. They’re small, between 1 and 3/8th of an inch in length and are dark red or brown in color.

All it takes is one run-in with fire ants to know why these pests are so undesirable. People who are allergic to their stings may have severe reactions such as a rash or intense swelling that may require medical care. Fire ant stings are not the only problem they present, though. Fire ants are considered dangerous pests because of how hard it can be to get rid of them. Most ants do something called “budding” when they feel threatened. When ants bud, they split the colony and separate in order to double their chances of survival.

Fire ants are especially good at this. A single colony can have up to 500,000 members. If this colony splits, each new colony can quickly increase their numbers and leave you with two large colonies instead of one. They can continue this process several times, making your yard a fire ant hotbed.

A quick internet search will reveal several do-it-yourself solutions for fire ants. You may have heard that you can spray lemon water on fire ants to kill them, or that pouring vinegar in the mound will solve your problem. Unfortunately, the solution to fire ants isn’t that simple. While lemon water or vinegar may kill the ants it touches, it won’t do anything to stop the colony from growing. In fact, killing ants this way may just make the colony feel threatened, which may cause the colony to bud and become even more aggressive.

Rather than take the risk of creating more ant colonies or more aggressive fire ants, let Bill Clark Pest Control offer the control that actually works. We have years of experience dealing with fire ants and other pests.

We have access to methods that really work, and we have the tools and materials to approach a fire ant problem safely and effectively. Stop putting up with painful fire ant stings. Call Bill Clark Pest Control to get rid of these pests once and for all.

I had a chance to watch Daniel M. play basketball at his church. Not only is he a good technician but he can also play hoops very well—I was impressed!