Taking the Sting Out of Fire Ant Season in Texas 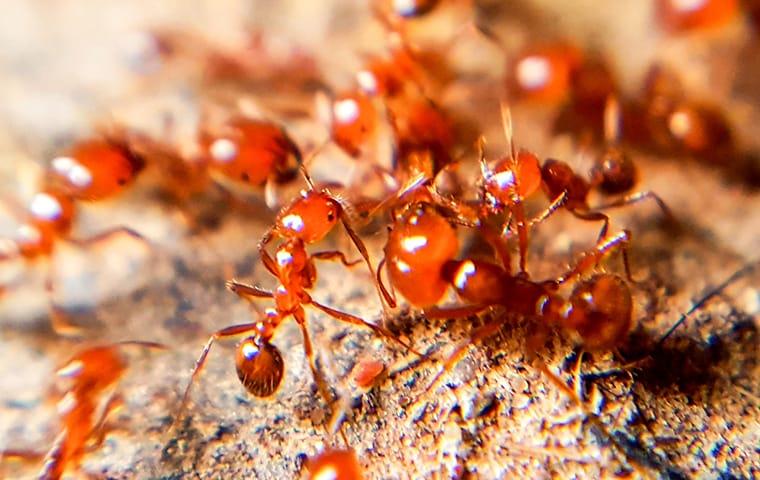 Texas is a great state, with delicious food and one-of-a-kind culture. If you live in Texas, you know there is much to celebrate here year-round. You're probably also familiar with some of the drawbacks that can come with living here, such as the dreaded fire ant. Fire ants are found across the southern United States. They are small ants but give painful stings that can send you running indoors faster than any other pest. Their mounds are often built outdoors near old stumps or in open areas. They can sometimes build nests under buildings and get inside, but they’re usually only found outdoors.

A fire ant mound is easily identifiable. They are large mounds of dirt that house the colony of ants. The ants themselves are small, measuring less than half an inch, and their color can vary between a light red to a darker brown. The most notable difference between fire ants and other kinds of ants is their painful venomous sting—earning these bugs their name. Many ants don’t sting, so if you experience a stinging bite, it’s probably a fire ant.

Bites from a fire ant are not usually dangerous other than the pain after they inject you with their venomous stinger. They can, however, cause an allergic reaction in some people. Often when a fire ant bites, it means you have come too close to the mound, and there are sure to be several more ants. They can bite many times, and you could find yourself swarmed by them in no time and covered in painful stings. You will probably feel the pain as soon as a fire ant bites you. The itchy welts they leave may last a few days, and if you do have an allergy, the reaction will be more severe. Fire ants don’t just bite humans; they can also swarm your pets and can hurt your dogs or other animals as well.

Preventing fire ants is much easier than eliminating them. The sooner you can spot fire ants in your yard, the easier it will be to remove them. Keeping your property maintained may help keep fire ants from moving into the area, and it will certainly help you spot them right away if they do. Because fire ants often build mounds near logs or stumps, you'll have less of a chance attracting them if you clear this kind of debris from your yard.

A better option for preventing fire ant colonies from taking over your property is to let Bill Clark Pest Control set up baiting systems around your yard. A bait system can prevent new ants and eliminate existing colonies. Though there are some do-it-yourself options, trusting professional pest control is the safest and most reliable way to control fire ants. Avoid the sting of fire ants with the proper equipment and the expertise that Bill Clark Pest Control offers you.

What a great technician you have in Roy H. He did an outstanding job at my home & enjoyed having him in my home.